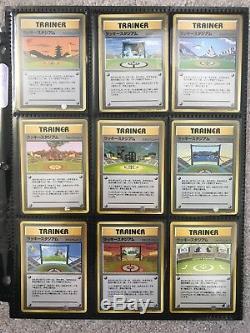 This listing is for the titled item and condition. Complete Lucky Stadium SET + POKEMON INTRO LUCKY STADIUM CARD (VERY RARE). This card was first awarded to participants of the Japanese World Challenge Summer tournaments held between July and August 2000.

Glett was available at Sendai Wasse, Sendai on August 6, 2000. Mint (M): UNOPENED/NEW (Fresh out of pack). Near Mint (NM) Card will be Mint or very close to it/may possibly have very light edge wear. Lightly Played (LP) Card may be close to NM. May have edge wear and/or small dents, but no major creases.

Moderately Played/Played (MP/P) Card will have visible creases, dents and/or edge wear. Heavily Played (HP) Card will noticeable damage such as large creases and/or heavy edge wear. The product listed is coming from a smoke-free household. Thanks for checking out my stuff, feel free to look into my other listings or shoot me a message if you have any questions!!!