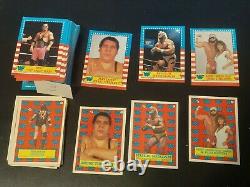 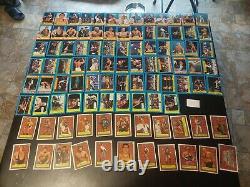 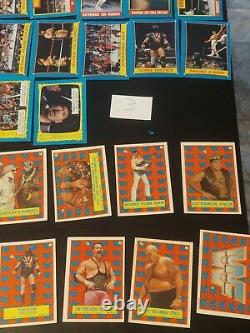 44 Her Eyes on Randy. 51 Fighting the Full Nelson.

A wise and colorful man once said, But the cream will rise to the top. 1987 Topps WWF is one of the only mainstream wrestling card sets to highlight pro wrestling's peak popularity of the'80s.

This time around, the set highlights the industry's biggest event of all-time, WrestleMania III. Things kick off with more than 20 profile cards, showcasing some of WWF's biggest names at the time. Familiar stars include Hulk Hogan, Andre the Giant, Randy "Macho Man" Savage and Ricky The Dragon Steamboat.

" But perhaps the most notable of them all is the card that leads off the set, Bret "Hit Man Hart. This represents his first card. Going beyond the profile cards is the Ringside Action subset.

These cards consist primarily of action shots from matches, although there are also recaps and backstory for the WrestleMania III main event between Hulk Hogan and Andre the Giant. Speaking of the pay-per-view, it's the focus of its own subset. Besides the main event, there are shots from a handful of other matches including the classic Intercontinental Championship bout between Randy Savage and Ricky Steamboat. Closing things out are nine Superstars Speak cards. Using the layout of a TV, these use corny captions that might as well be straight out of a bad wrestling promo at the time.

A similar subset is in the 1985 set. The design has a blue motif throughout. While the different subsets have tweaked designs, it's the blue that runs throughout. The most distinct are the profile cards, which incorporate the stars are stripes of the American flag as well.

Typical for Topps in the'80s, collectors also have a set of stickers to chase. Landing one per pack, there are 22 in all. Fronts have a red background with a tile of the WWF logo. It's bright and hard to miss. Sticker backs double as puzzle pieces. Put together, they form a shot of Hogan carrying an American flag at ringside. This item is in the category "Sports Mem, Cards & Fan Shop\Sports Trading Cards\Trading Card Singles".

The seller is "wikk61" and is located in this country: US. This item can be shipped to United States.