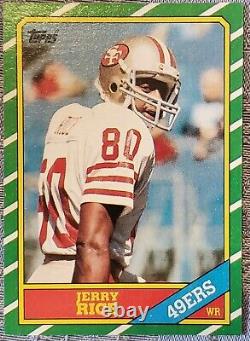 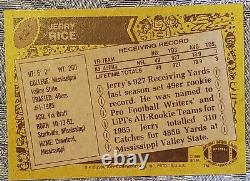 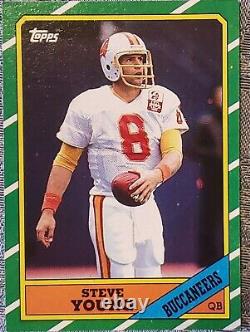 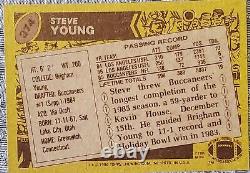 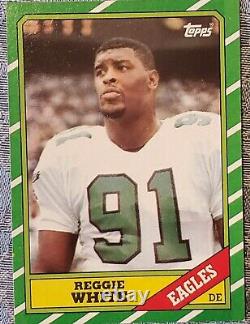 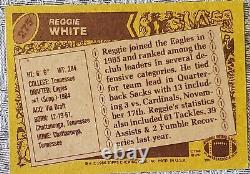 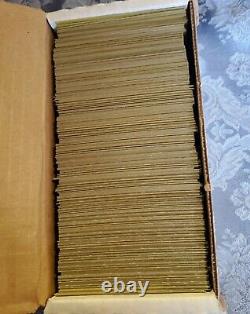 1986 Topps Football Complete Set Jerry Rice, Reggie White, Steve Young ROOKIES!! 1986 Topps Football is another in a string of strong mid-80s gridiron sets. It has a distinct design and a killer checklist, which is about all collectors could expect at a time that wasn't all about the inserts and autographs. The 1986 Topps Football set has 396 cards, the standard for the time. The layout immediately stands out thanks to its green borders and white stripes -- like a football field.

Player photos are placed inside a thin yellow inner border. The nameplate is at the bottom of the card. A horizontal bar has the player's name on one side and position on the other.

The team name is in a separate overlapping diagonal bar. Card backs are rather intricate thanks to busy background drawings. The main text are is a tilted rectangular area. It includes vital stats on one side, and stats and notes on the other.

The key card in 1986 Topps Football is the Jerry Rice rookie card. The checklist also includes cards from former USFL players who moved to the NFL. Steve Young and Reggie White both have their first NFL rookie cards. However they also appeared in 1984 Topps USFL. As a result, their NFL rookie cards aren't held in quite the same regard on the secondary market.