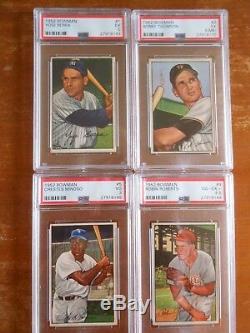 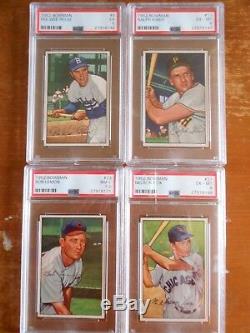 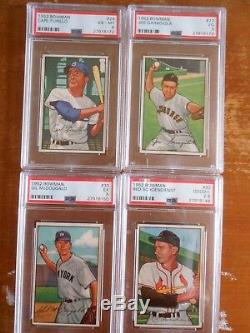 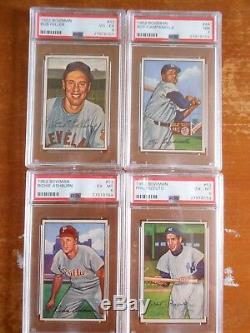 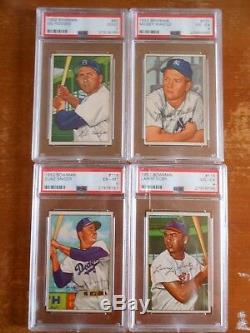 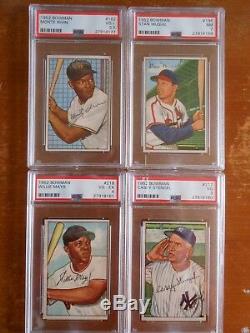 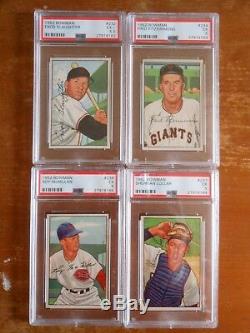 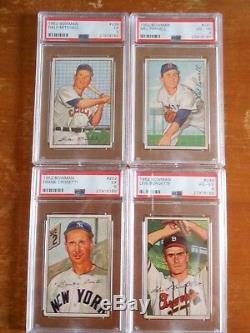 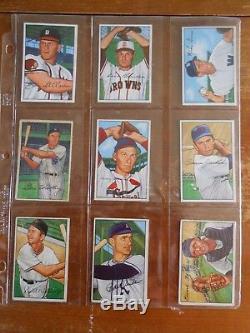 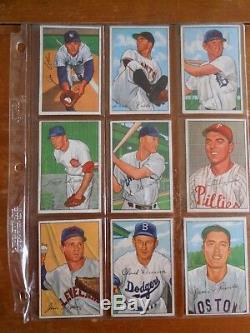 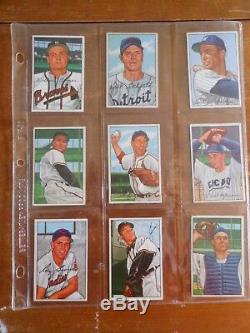 The 1952 Bowman set consists of 252 cards, each measuring 2-1/8 by 3-1/8. Each card front shares similarities with the 1951 Bowman entry, with a color art reproduction of a player photograph and facsimile autograph on the front. The set is anchored by the cards of 1950s National Pastime heroes Mickey Mantle and Willie Mays, as well as fellow Hall of Famers Yogi Berra, Roy Campanella, Leo Durocher, Stan Musial, Pee Wee Reese, Robin Roberts, Warren Spahn and Casey Stengel. Though the set is without any known variations or scarcities, the low numbers (#s 1-217) are somewhat easier to secure than the high numbers (#s 218-252).

Bowman continued to slowly and steadily improve their product offering each year, since the company began issuing. The card fronts of the 1952 Bowman cards feature an attractive color drawing of the player. Rendered from black and white. The main change that Bowman made from the previous year was removing the. Black box on the card front that contained the player's name and replacing it with his facsimile autograph. While the 1952 Bowman Baseball Card Set is overshadowed by the grandeur of the classic 1952 Topps Set, the 1952. Considered the "bargain" set of the early 1950's issues.

I apologize for whatever glare and distortion you might see in the pictures. As you can see, each plastic sleeve holds 9 baseball cards. Where you see one or more spaces in a sleeve, that is where a PSA-graded card would have been located. Except for those cards graded by PSA, the entire set has been stored in numerical order in the sleeves. Once you arrive at the link address, I recommend you navigate the web site as follows.

5 Use the navigation tools to stop, start, exit the full screen, and get out of the slide show, and go back to the album; there are many variations of how you can look at the pictures. If you wish additional pictures of any particular card, send me a message and I will add them to the Shutterfly album.

The average grade of the 36 PSA graded cards is 4.68. In my UNPROFESSIONAL opinion, Id say the AVERAGE PSA grade of all 252 cards in this set is around 4.5. MY OPINION IS STRICTLY AN UNPROFESSIONAL ONE. Heres some background information about this sets owner.

My friend Bruce is in his late-70s. He has been a sports card collector since he was a youth. Like many collectors, he bought baseball cards in packs at the local Five and Dime Store, down the block from his boyhood home.

Bruce is the ORIGINAL and ONLY owner of the baseball cards making up this set. Bruce does not own or use a computer; but, I do.

He has asked me to assist him in getting some of his more valuable cards. Both Bruce and I are as honest as the day is long.

HOW DID WE DECIDE WHICH CARDS WOULD GET GRADED BY PSA? We went through the PSAs price guide for this set; check out this link.

Bruce then determined some other popular cards which he wanted graded. HOW DID WE DECIDE WHICH CARDS TO INCLUDE IN THE SET FOR THIS LISTING? Bruce owns a number of duplicate cards for this set. We carefully inspected all the duplicate cards, and picked out what we felt were those cards in the FINEST condition for inclusion in the set for this listing. WHAT WAS THE BASIS FOR THE ASKING PRICE? As we have already mentioned, vintage baseball. Bruce and I feel is very fair and an exceptional value. Here is an article about this set written by Kevin Glew back in 2010 for PSA's Sports Market Report. 1952 Bowman Baseball - The Forgotten Set? It's the Gene Woodling of vintage sets. 285 hitter in six seasons with the Yankees, Woodling was a key contributor to five World Series championships. Unfortunately, when your fellow outfielders are DiMaggio and Mantle, it's easy to fly under the radar. The 1952 Bowman set sandwiched between two hobby legends (1951 and 1953 Bowman) and facing off against the vaunted 1952 Topps set has suffered a similar fate. So much so, in fact, that some hobbyists have deemed it the forgotten set. "The 1952 Bowman set definitely gets overlooked, " said Dick Weigle, who owns the No. 10 set on the PSA Set Registry. Competing with Topps for the first time, this little-talked about issue fashioned a design similar to the company's 1951 product. Measuring 2-1/16" by 3-1/8", card fronts feature artistic reproductions of player photos and facsimile autographs. "I still think the 1952 Bowman set is one of the most attractive card sets ever produced, " said Matt Conroy, whose set ranked 27. Mike Ryan, who owns the registry's No. 19 Current Finest set, agrees. "The set is very well produced, " he said, also lauding its great color.

Released in seven, 36-card series, the 1952 Bowman set showcases 252 cards, down from 324 pasteboards in the 1951 issue. Cards from the first two series (#1 to 72) can be uncovered with clean white borders and clear pictures or with brownish borders and dull-looking pictures. Also, some versions of the Bill Werle (#248) single are missing the "W" in his signature. Cards from the final series (#217 to 252) are generally more difficult to track down than those from the earlier series.

In some cases, trades consummated just prior to press time disrupted the team sequence. D'Luhosch notes that similar sequencing was employed in the 1951 Bowman set. By examining information on the card backs, D'Luhosch has also been able to establish when some of the series were released. On the Jackie Jensen (#161), for example, the text indicates that he was traded to the Senators at press time.

This trade took place on May 3, 1952, so it's safe to assume that fifth series cards (#145 to180) were printed after May 3. Similarly, D'Luhosch notes that the Tommy Brown single (#236) showcases him in a Phillies uniform on the card front, but indicates that he's a member of the Chicago Cubs on the reverse. The 1952 Bowman cards were distributed in one-cent, one-card packs and five-cent, six-card packs.

"I wasn't going to go near the 1952 Topps set, because I just knew there was no way I could afford to collect that set, with any kind of quality, " said Conroy, when asked about the appeal of the 1952 Bowman set to him. You've got to be quite wealthy to get a high grade set of 1952 Topps.

Otherwise forget it, he said. People have ignored the'51 and'52 Bowman sets, which, in my opinion, are just as nice or better than some of the Topps cards. Though bereft of Hall of Famer rookies and singles of Ted Williams, Jackie Robinson, Whitey Ford and Eddie Mathews, this set does boast the first Bowman cards of Minnie Minoso (#5), Gil McDougald (#33), Joe Collins (#181), Bob Friend (#191), Roy McMillan (#238), Billy Loes (#240) and Lew Burdette (#244).

And unlike its Topps counterpart, this set offers singles of Ralph Kiner (#11), Casey Stengel (#217) and Stan Musial (#196). One of the most sought-after cards in the hobby, this is.

Of the 941 submitted, there has yet to be a PSA GEM-MT 10. Hobbyists, however, consider Mickey Mantle (#101) and Willie Mays (#218) to be the key cards in this set. "Mantle's'52 Bowman card is the best-looking Mantle card I've ever seen, " said Weigle. The card shows him sitting there with his hands crossed.

It's a beautiful card. It's a beautiful shot of him. The Mantle card is one of the really iconic Mantle cards, he said. There are two PSA 10 Mantles and 11 PSA 9s. Centering issues, coupled with being a tough high number, make the Mays single (#218) difficult to track down in pristine condition. "There were a lot of Mays cards that were not cut properly, " said Conroy. Of the 843 Mays submitted, there has yet to be a PSA 10 and there are just three PSA 9s. As the set's first card, the Yogi Berra single was subjected to additional wear.

It's also hampered by poor centering. Just six copies have received the coveted PSA 9 grade, with no examples grading higher. Like the set's first card, the last card, Frank Crosetti (#252), is also subjected to additional wear.

Staining on the card backs is a common condition issue with these singles. Weigle points out that this is likely because many of these cards came in one-card packs. Discoloration and poor centering also tend to plague these cards. "The one thing about the cards that's kind of annoying is the amount of cards that were badly cut or are off-center, " noted Conroy.

These condition woes make the 1952 Bowman set a challenging issue to complete in flawless form. For now, however, this set despite its impressive artwork and respectable player selection continues to be the Gene Woodling of vintage offerings. But the 60, 1952 Bowman sets on the PSA Set Registry are proof that this issue, while overshadowed, has not been forgotten. Should you have any questions or concerns , or, as I have previously mentioned, wish to see additional pictures, please contact me. Thank you for reading this listing; it's very much appreciated.

The item "1952 Bowman Baseball Card Complete Set (252 cards), with 36 Cards Graded" is in sale since Sunday, November 5, 2017. This item is in the category "Sports Mem, Cards & Fan Shop\Sports Trading Cards\Baseball Cards". The seller is "999richard999" and is located in Seaford, Delaware. This item can be shipped to United States.